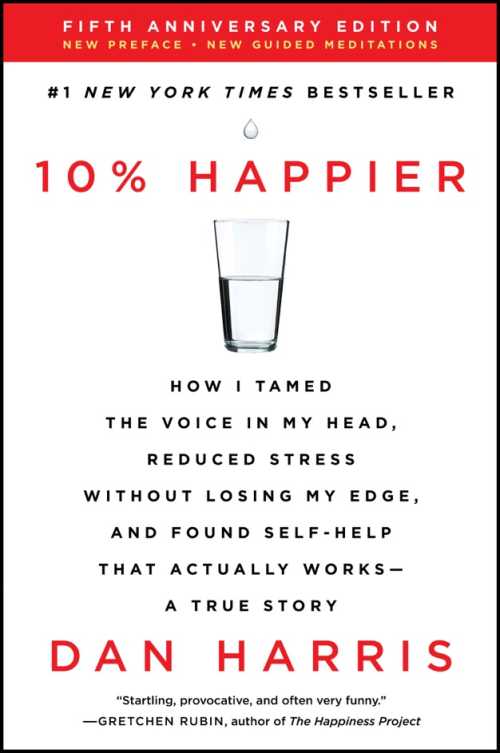 How I Tamed the Voice in My Head, Reduced Stress Without Losing My Edge, and Found Self-Help That Actually Works

After having a nationally televised panic attack, Dan Harris knew he had to make some changes. A lifelong nonbeliever, he found himself on a bizarre adventure involving a disgraced pastor, a mysterious self-help guru, and a gaggle of brain scientists. Eventually, Harris realized that the source of his problems was the very thing he always thought was his greatest asset: the incessant, insatiable voice in his head, which had propelled him through the ranks of a hypercompetitive business but had also led him to make the profoundly stupid decisions that provoked his on-air freak-out.

Finally, Harris stumbled upon an effective way to rein in that voice, something he always assumed to be either impossible or useless: meditation, a tool that research suggests can do everything from lower your blood pressure to essentially rewire your brain. 10% Happier takes listeners on a ride from the outer reaches of neuroscience to the inner sanctum of network news to the bizarre fringes of America’s spiritual scene and leaves them with a takeaway that could actually change their lives.

So when I think about the pillars of longevity, what are the things—what are the levers—you have to pull to live the longest, most productive, high performing life imaginable? It involves fixing your nutrition. We’ve talked about that. Changing your exercise—we’ve talked about that. Fixing your sleep—we have not talked about that, but that’s important. Using the right supplements—we’ve not talked about that. Modulating hormones as necessary—we’ve not really talked about that. Fixing anything that needs to be fixed, on top of that pharmacologically, and I’m a huge proponent of pharmacotherapy under the right setting.The final component is managing your stress. So as a guy who’s thinking about this, I became really interested after actually reading Dan Harris’ book, which the title is blanking on me, but it’s “10% Happier” actually is the title of the book.

And I loved the book, and I read it. And I’ve read a lot about mediation, but it was the first book I read where I thought, like, “I can relate to this guy.” You know?