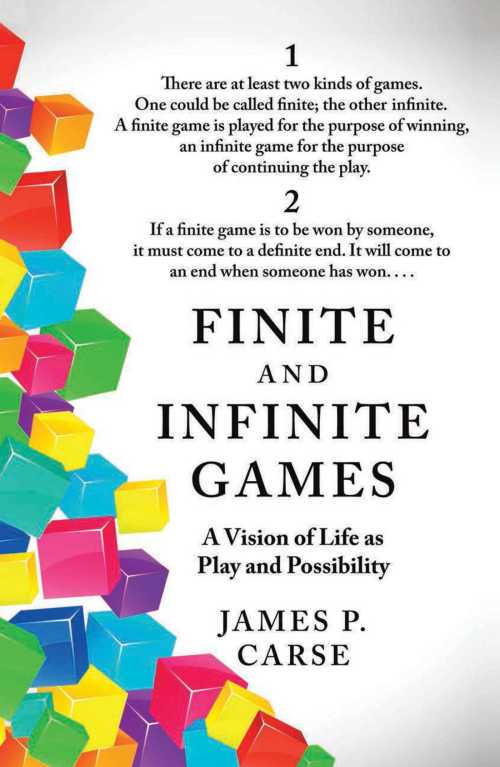 A Vision of Life as Play and Possibility

“There are at least two kinds of games,” states James P. Carse as he begins this extraordinary book. “One could be called finite, the other infinite.”

Finite games are the familiar contests of everyday life; they are played in order to be won, which is when they end. But infinite games are more mysterious. Their object is not winning but ensuring the continuation of play. The rules may change, the boundaries may change, even the participants may change - as long as the game is never allowed to come to an end.

Carse explores these questions with stunning elegance, teasing out of his distinctions a universe of observation and insight, noting where and why and how we play, finitely and infinitely. He surveys our world - from the finite games of the playing field and playing board to the infinite games found in culture and religion - leaving all we think we know illuminated and transformed. Along the way, Carse finds new ways of understanding everything, from how an actress portrays a role to how we engage in sex, from the nature of evil to the nature of science. Finite games, he shows, may offer wealth and status, power and glory, but infinite games offer something far more subtle and far grander.

Carse has written a book rich in insight and aphorism. Already an international literary event, Finite and Infinite Games is certain to be argued about and celebrated for years to come. Listening to it is the first step in learning to play the infinite game.

The basic premise that changed my mind was to understand that in the world there were two kinds of games. There were finite games in which there were winners and losers. We often call that a zero sum. If somebody wins, someone else has to lose. In those kind of games the rules are fixed. You have fairness. If someone is breaking the rules, it’s unfair. You don’t want to play. You play until somebody wins and most of the games in the world, they’re about winning and losing, but there’s another kind of game called the infinite game and there aren’t winners or losers. The rules are not fixed. You’re kind of constantly changing the rules just to extend the game and the purpose of the game is just to keep the game going.

Yeah, and that’s just of general philosophy, one about life and how to, I don’t know, navigate in a more improvisational way and ask, like, “What game am I really playing in interaction. Am I playing for a finite game outcome to win the game, or am I playing to keep playing,” which has a lot of overlaps with improvisation and things like that.

I like Finite and Infinite Games which has been going around a lot.

James Carse is really good. I had him to an event, a hedge fund retreat we had a couple years ago and spent some time with him. And I think he’s a very profound guy. He was observing that – I asked him how he came up with the concept of finite versus infinite games, and he said he was watching his kids play. And he noticed that there were some games like card games or baseball, etc., where their whole motivation and intent was to have the game end and get the trophy. And then he noticed there were other games they were playing where they were more fantasy games, where their goal was to recruit other people to play in that game with them, such as him, as their dad. And the goal was to keep the game going as long as possible. And I think it’s a super profound insight of the different ways you can relate to games in your life if you can see the game you’re playing.

And I asked him for examples of infinite games which he doesn’t give in the book. He mentioned, as a religious studies scholar, he thinks Buddhism and Judaism are two infinite games. I guess in religious studies, neither of those has a central authority or a central army. So it’s unlike Catholicism. They have difficulty making sense of why it persists over time. And so the framework of, “It’s an infinite game,” Buddhists and Jews are recruiting, to various degrees, people into their game and wanting to just keep playing the game for its own sake. I thought that was an interesting framing.

So anyone who is interested in philosophy and looking at games as a way of life, that’s a really good one.