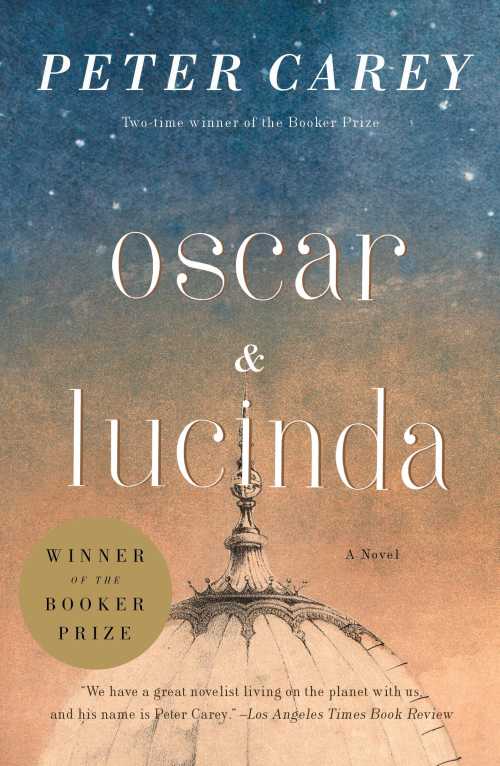 Oscar Hopkins is a high-strung preacher's kid with hydrophobia and noisy knees. Lucinda Leplastrier is a frizzy-haired heiress who impulsively buys a glass factory with the inheritance forced on her by a well-intentioned adviser. In the early parts of this lushly written audiobook, author Peter Carey renders the seminal turning points in his protagonists' childhoods as exquisite 19th-century set pieces.

Young Oscar, denied the heavenly fruit of a Christmas pudding by his cruelly stern father, forever renounces his father's religion in favor of the Anglican Church. "Dear God," Oscar prays, "if it be thy will that thy people eat pudding, smite him!" Lucinda's childhood trauma involves a beautiful doll bought by her struggling mother with savings from the jam jar; in a misguided attempt to tame the doll's unruly curls, young Lucinda mutilates her treasure beyond repair. Neither of these coming-of-age stories quite explains how the grownup Oscar and Lucinda each develops a guilty passion for gambling. Oscar plays the horses while at school, and Lucinda, now an orphaned heiress, finds comfort in a game of cards with an odd collection of acquaintances.

When the two finally meet onboard a ship bound for New South Wales, they are bound by their affinity for risk, their loneliness, and their awkwardly blossoming (but unexpressed) mutual affection. Their final high-stakes folly - transporting a crystal palace of a church across (literally) godforsaken terrain - strains plausibility, and events turn ghastly as Oscar plays out his bid for Lucinda's heart. Yet even the unconvincing plot turns are made up for by Carey's rich prose and the tale's unpredictable outcome. Although love proves to be the ultimate gamble for Oscar and Lucinda, the story never strays too far from the terrible possibility that even the most thunderstruck lovers can remain isolated in parallel lives.

It was just so lyrical. Every single chapter is like a little jewel. He has the most amazing way of bringing to life a scene with not just beautiful language, but incredible imagery. Like a coat rack with cats and coats on it looking like it’s covered with crows, like this image of these birds who are gonna take flight. And one of a bird diving into the water, piercing the membrane between dreams and reality, and he just had these wonderful turns of phrases where this woman who–there are parts that are really funny, too. So it’s not just all lyrical.